This is time to create Auto LPG Dispensing Stations, as the Government of India has come forward with progressive proposals, enacted laws and rules to promote LPG as ideal fuel considering the advantages on cleanliness, eco-friendliness and universal availability besides the cost factor. While it has become mandatory to use LPG as fuel in New Delhi and Mumbai for public vehicles such as buses, trucks, vans, auto rickshaws, taxies, etc., a huge number of private-owned vehicles are also running with LPG in these metros and other metros as well. Soon it will be mandatory to use LPG as auto fuel in other cities of rest state and their capitals, major cities and towns. Two wheeler kits also introduced. Delhi, Haryana, Jammu & Kashmir and other state Government are in the process of introducing Gas business in their cities. 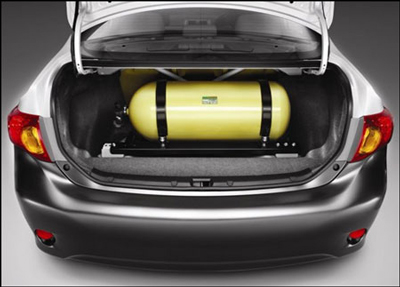 The above factors have opened a new vista in automobile sector, added to it, many of the automobile giants like Maruti, Hindustan Motors, Hyundai, Ford, GM, Bajaj, TATA, Leyland, Swaraj Mazda, etc., have started manufacturing Auto LPG operated vehicles as OEM. Once the availability of more ALDS network are established – Which is expected to happen within the next two years- there will be a spurt for conversion to Auto LPG.
India produces about 62 lakhs of vehicles and with the entering of new international players from Japan, Italy, Germany, France, etc., market will be flooded with more varieties of vehicles in petrol. This will lead to an increase in conversion to Auto LPG, which will create more demand for Auto LPG stations. The most expected vehicle Nano also will be delivered with petrol engine at first and gas and then diesel. A proposal of using LPG in existing diesel engine is also in consideration. The usage of domestic cylinders in automotive vehicles is prohibited by law, and it will be effectively enforced wherever the ALDS are installed, and the gas-based vehicles are compelled to go in for the LPG version with fitted tank. From the above, it is found that a ready demand exists for Auto LPG which will see tremendous increase in the years to come. As per a survey in India, 18, 00,000 number of petrol cars have already been converted to LPG. These cars are running on LPG using the commercial and domestic cylinders. Assuming that a car in India runs approximately 12,000 km in a year, it needs 1,200 liters of LPG, which shows that the present consumption of Auto LPG is 18,00,000 X 1,200 = 2,16,00,00,000 i.e. 2,160,000 Kilo liters of LPG per annum.

Several Indian cities including Ahmedabad, Bangalore, Chennai, Hyderabad, Kolkata, made use of fiscal measures to address the problem of vehicular pollution.
Though still very nascent these new policy initiatives have begun to take roots. These fiscal measures can enable rapid introduction of clean fuels like LPG and create fiscal incentives. The cities that have taken the lead in this regard include Delhi, Tamil Nadu, Bangalore and Hyderabad. These cities have evolved state, city specific models of policy framework. Key focus of these fiscal measures are clean fuels, disincentives for older vehicles; and creation of dedicated fund from taxes on polluting fuels to pay for pollution control efforts. Significant success has been achieved in Bangalore, where LPG was made mandatory in three wheelers. With about 40 filling stations, many with twin dispensers, Bangalore now serves more than 75,000 LPG auto rickshaws and is one the most successful auto LPG markets in the country.
Apart from non-fiscal incentives, Bangalore put in fiscal measures to give a thrust to the LPG conversion in the city.

Bangalore introduced a Green tax that is imposed on the older vehicles. Introduced on April 1, 2002, tax schemes are different for transport and personal vehicles. Transport vehicles that are more than 7 years old pay the green tax at the rate of Rs. 200 at the time of the annual renewal of their permits. Two-wheelers and cars that are more than 15 years old are taxed at the rate of Rs.250 and Rs.500 respectively at the time of the renewal of their registration after 15 years from the date of purchase and first registration.

Bangalore has launched one of the largest LPG three-wheeler programmes, one of the key elements being fiscal incentive for conversion. City government has offered a subsidy of around Rs 2000 to three-wheeler owners to help bear the cost of conversion. Nearly 75,000 auto rickshaws have already converted to LPG.
Similarly, Kolkata and Chandigarh have initiated firm efforts. Kolkata High Court order mandates all 15 year old public vehicles to be replaced on or before July 31 this year. Out of 32,000 autorickshaws plying on the streets of Kolkata and its suburbs, 4000 have converted to LPG. The high court had earlier set December 31 as the deadline for removing these auto rickshaws, but later extended it to July 31. Auto emissions account for over 60% of the city’s air pollution and close to 50% of the city’s residents suffer from major respiratory disorders. Carcinogenic benzene levels in 2006-07, were found to be as high as 36 ug/cum, much higher than Delhi, which has a larger vehicle population. This is against an average limit of 5 ug/cum, specified by the National Draft Ambient Air Standard.

Starting September 1, 2009, the Union Territory of Chandigarh shall allow only LPG 3 wheelers to ply on its roads. Chandigarh has more than 2,000 auto rickshaws running on its roads and almost an qual number of them come to the city from its satellite towns of Mohali and Panchkula.